The Holy Bible is now a Crime Scene - Do Not Cross This Line.

especially on the nature

So what do you think of these drawings? They are just some of the creatures whose FIMIOL photographs have been impressed on the Garden of Eden landscape. Which Google EarthTM mapping image hosts them and what is its location? Furthermore why are they there and so easy to detect? How did they get there? Who put them there and when?

Genesis 2:18 - Then Yahuw’ah of Eluhiym said, “It is not good for the man to be alone. I will make him a helper similar to him.” 19. And out of the ground Yahuw’ah of Eluhiym formed every beast of the field and every bird of the heavens, and brought them to the man to see what he would call them. And all which the man might call a living soul, that was its name. 20. And the man gave names to all the cattle and birds of the heavens and to every beast of the field, but for Adam there was not found a helper similar to him.”

WOW! Don’t you think this is powerful evidence for the truthfulness and accuracy of the first two chapters of Genesis? There are literally scores of such images to back up these and chapter three, as well as others in the first five books of the Hebrew canon.

Like the uniqueness of the above forms, the e-Book titled I Have Nude Photos Of Your Parents will eventually contain lots of stimulating information previously unknown to human beings.

For example, did you know that what appeared as living was previously assembled as energy structures which, when activated, attracted molecules from their earthy environment to become living creatures?

The Creators, precisely ten in number, employed highly advanced technologies developed over billions of years to bring about life on Earth. Creature life first began as a created single cell organism, itself experimented with until They got it right and then developed from there. It did not happen overnight.

Most of the Eluhiym will be identified here since They comprise the wedding guests for Adam and Chav-vah’s marriage. There is just so much to publish in this e-Book of which the present writer was unaware when he first began promoting it. And he is still being overwhelmed with other ‘new’ information.

Just to get everyone up to speed, the first eBook will most likely deal with what happened when the Lamb of Eluhiym as El Most High was replaced by Yahuw’ah in the patriarchal narratives.

The second, titled The Dangerous God, will explain how human beings are infected with sin through soul viruses.

Next, the third will be I Have Nude Photos Of Your Parents which will focus upon the satellite images related to the Garden of Eden experience. This will be followed by a fourth dealing with the Enthroned Eluhiym and the Keruwbiym. Writing will begin before the end of 2016. 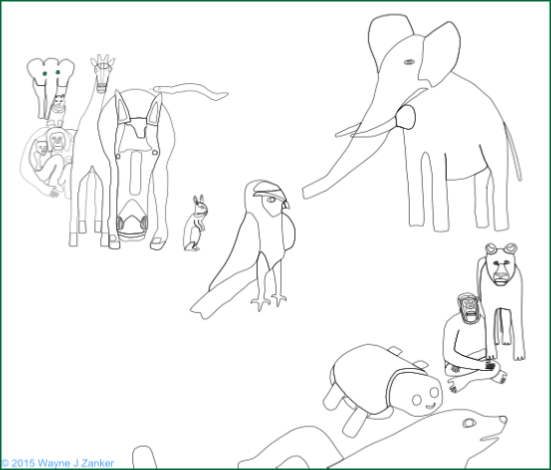