Occurring in broad daylight and without any astronomy software, Yohannan with his priestly connections (John 18:15-16) only had this record in mind and this was used in the vision of chapter 12, along with the FIMIOL of Chavvah, the Serpent and the Infant in the Garden of Eden gallery.

Miryam was both a solar and lunar Virgin; hence the maid or woman newly married (Heb. ha-’almah) conceives in Isaiah 7:14, but the virgin has in the womb a son (Greek ή παρθένος), according to Matthew 1:23.

In principle this agrees with Miryam’s claim in Luke 1:34-35 that she is a virgin. Matthew’s Gospel, though, was first written in Hebrew and ha-’almah would have appeared there.

When translated the Greek LXX text with its ή παρθένος replaced the Hebrew more or less, to keep it in line with Luke’s account written in Greek. Otherwise it might have been to highlight her solar and lunar birth sign.

After conception she was no longer a virgin, while beforehand she was. Of interest is the fact that at the time of her birth all the planets were above the horizon.

The Births of Yohannan the Dipper and Yeshuwa

Yohannan the Dipper was born late at around 11:00 PM on Monday, April 5, 6 BCE, while Yeshuwa came five months later. So he was born after the next lunar day had begun, (evening, then morning) yet under the zodiac sign nominated for April 5. Birthdays were recorded by date, as well as sun and moon positions.

Below is the UTC data for the phases of the moon. There was a dark moon on the 19th. It was 8º behind the sun on the 20th and 19º on the 21st. Nisan always has 29 days, due to first visibility usually on the second day after molad. At least 12º behind the sun is required for a sighting.

17 - Archer (one day left in Saggitarius) 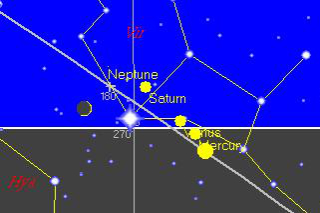