Recently the present writer learned that an FCU type device was used to project the Voice from a location light years away, perhaps from Eden itself.

Yet in retrospect those words might apply to almost anyone. It would take another fifteen and a half years before being permitted into Heaven on August 16, 1992. During his first and only attempt in 1979 he was barred by an angel and threatened with death if he proceeded. He was still so bad.

From then on things slowly changed as one by one the precious beliefs he had once held and confessed were knocked down and replaced by accurate insights. A small business named Hieronomy Books was registered only to make a complete loss, since he was still promoting Christianity and deeply influenced by the writings of Paul, Silvanus and Luke.

When a chance visit to a web site enabled him to see differences between what Yeshuwa (Jesus back then) and Paul taught, he decided to investigate and see what others there were. The list of counterpoints quickly escalated in what would turn out to be an enormous undertaking. Some of these are listed on this web site.

In May 2009 at sixty years of age he renounced Christianity. After this Heaven opened its doors to knowledge. Wanting to know where the real Mount Ciynay is and the route of the Exodus from Egypt, the answers flooded in with the help of Numbers 33 and Google Earth™. All of it was unique. No scholar or archaeologist had even considered any of the material.

To learn where the sea crossing occurred and how the waters were parted for thirty-six hours (the time Yeshuwa spent in the tomb) was so fascinating and logical. However, the FIMIOL photographs had to be revealed first before that logic could be understood.

Yeshuwa and Yahuw’ah, like OM and His two companions, like to spend time fashioning Their candidates so that they become useful to Them. Yohannan the Dipper’s mistake was that, although he had access to the “Kingdom of the Heavens” in the Thrones enclosure, he was too ambitious and wanted the powers of Eliyahuw to destroy the king’s soldiers after they verbally attacked him.

In this he had not been trained like Eliyahuw (Elijah). When Yeshuwa refused to call down fire from Heaven (2 Kings 1:9-15) on his behalf, then he decided to go ahead anyway, by himself, and railed against Herod Antipas over his new wife. Incidentally, the angel of Yahuw’ah in 2 Kings 1:15 is Yeshuwa. He also refused Ya’aqob and Yohannan’s request in Luke 9:54-55.

Yohannan in the end was just a preacher who was given the great honour of baptising and introducing Yeshuwa as the Messiah (haMashiach) of Yisra’el. He died an unbeliever after rejecting the Lord for failing to help him complete his identity as Eliyahuw foretold in Malachi 4:5-6.

Like most other people, he misinterpreted the purpose and mission of Yeshuwa. Even His own mother Miryam and brothers got it wrong. Yet after His resurrection, they all came together in a new spirit of co-operation. 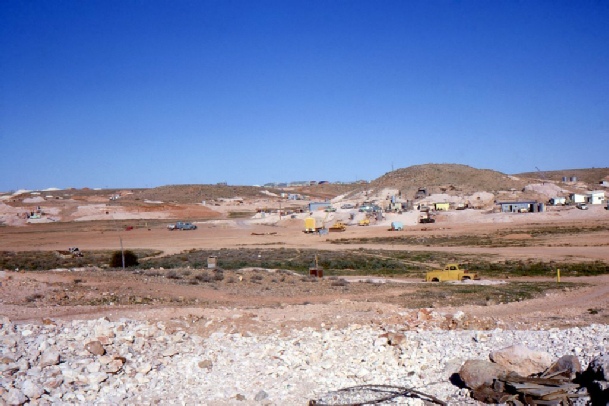 A view of Post Office Hill with the Coober Pedy town centre in the background taken in June 1968. Observe the blue sky. It was like that on Wednesday, February 23, 1977 when the Spirit of John 3:8 spoke those challenging words to the present writer.