What Is FIMIOL Photography? -  II 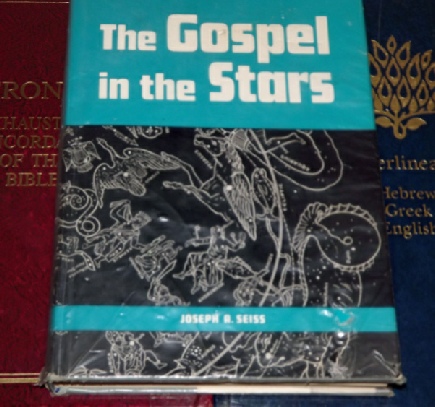 Similar to FIMIOL lines drawn on Google Earth™ mapping images, this brilliant book by Joseph A. Seiss fills in lines faded in the night sky.

The front and back jackets, as throughout the book, display an intimate knowledge of all constellation images or signs. Those skilled like him behold these as slightly glowing forms.

(Joseph A. Seiss, The Gospel In The Stars, © 1972, first published in 1882, Kregel Publications, Grand Rapids, MI). Used by permission of the publisher. All rights reserved.

Astronomy has come a long way, yet at the cost of such visuals. While the book and its author are products of their time, like a true expert Joseph Seiss tapped into what others knew millennia ago.

Modern astrologers, though, do not see the images, but divide the sidereal year into twelve 30 degree units, giving each the sign used for the past 2000 years or so.

However, there is a new kid on the block, but one which has been around for millennia. Those who have ever contemplated Qumran Scroll 4Q318, which traces the moon’s passage through the equatorial zodiac, will wonder at how such detailed knowledge came to be.

4Q318 features three signs with its 2-2-3 model for each week with one constellation provided for the final one or two days left in a lunar month to make it 29 or 30 days long.

Initially it involved the Jubilee solar calendar with its 30-30-31 days in each quarter, while still using the same method as the lunar calendar. With that text’s reference to thunder it may be dated to the autumn of 94 BCE around the time of the Feast of Tabernacles.

Here it represents the start of the solar calendar’s usage in the Second Temple, where it went out of fashion soon after king Alexander Yannai died.

It is a genuine temple artefact. The yachad or community’s priests and Levites were most definitely not Essenes, but a priestly brotherhood who were neither Sadducean nor Pharisaic. Yohannan the Dipper expressed the community’s dislike and distrust of these two movements when he began preaching north of the caves near Bethany Beyond the Jordan. Yeshuwa shared his sentiments. He, too, called them “offspring of vipers.”

Yeshuwa’s birth on September 7, 6 BCE at 11:37 AM occurred after the moon had literally left the Twins (Gemini) and entered the Crab (Cancer) constellation (Luke 2:4-7). This is both according to language analysis, SkyMap Pro 11 and the application of 4Q318’s 2-2-3 format. Its months are laid out on following pages.

Another example is the sign of a woman clothed with the sun, where the moon is positioned under her feet (Revelation 12:1). Defining Miryam’s date of birth on September 11, 22 BCE, it reflects an astronomical date a day later.

For this a simple explanation exists, since all the JavaScript calculators support September 11, not 12. This, too, is laid out in the pages ahead. A similar date in 19 BCE, according to 4Q318, is September 7, not 8.

It turns out that the 4Q318 tool was widely used for recording dates of birth and then learning about a person’s character, based upon the meanings applied to each constellation figure. See Joseph Seiss for details.

Using this template the priests in charge of the temple calendar knew where each zodiac constellation was day and night. Yet they had no astronomy software, just the next best thing which even today is still doing its work, despite the precession of the equinoxes. From the example set by the Mishmarot A and B fragments it was possible to prepare not just one but several zodiac calendar years in advance.