To make her life bearable she planted trees near the house and established flower gardens and rockeries. Her husband and sons looked after the fruit and vegetables. There is nothing unusual in this. It is common practice.

The present writer also realises that doing business here is tough, so will be moving FIMIOL Photographics to Eden forty light years away. From there he will come and go, using its incredible technology to keep his publishing enterprise afloat.

While Eden has no currency, it has abundant resources, just not for Earth. Computers are still required there. Yet it has no Internet, mobile phones or tablets. The Niphla’iym also use computers. It will be interesting to see how compatible their highly advanced models are. Who knows to what extent they have been guiding the development of digital images and music?

While one cannot buy one’s way there, money will be needed to assist with the selection of migrants who must leave much of what they own behind. That, too, is an attitude learned from his mother who opened up her home to migrants from Europe after the war and into the early 1950s. E-Books will be published to help fund this.

While she lived frugally, she still had time to help out aborigines released from the Port Augusta gaol close by with her husband giving them paid employment and accommodation. Most were friendly and not afraid of work. Some would stay long enough to return to the Outback, others a lot longer.

For most of his life the present writer has also lived below the poverty line and his mother showed him how this could be done. Her influence cannot be over-estimated. Many of the world’s sons would probably agree about their own. Motherhood can be an amazing institution.

Making a list of how parents influence their children is not rocket science. Nor is it embedded in DNA which deals with the body and not the mind. Instead it comes in the form of soul instructions or viruses. The more often these are reinforced, they stronger the impact they have. 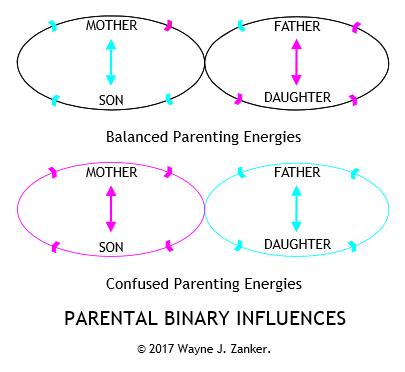 The notion of themes having binary aspects is already well established. Days are divided into light and dark, humanity into rich and poor, tall and short, and the sexes into male and female.

On the left is a diagram designed to explain how the traditional family normally operates and how things go wrong whenever soul viruses become involved.

To keep it simple, not every variation is featured.

The above highlights the need for good role modelling from an early age. For example, if a father walks out or is absent a lot, then the family’s energies become confusing. A mother might ignore her children, preferring to do other things like partying or spending too much time working at a career or social networking. Parental irresponsibility is then perceived by the children as normal behaviour. They grow up thinking they can do the same.

Put directly underneath each other it is easier to discern.