It is a rather frightening notion to think that the female mind is tuned into this serpentine Son of God. Of the two sexes she is the most religious. The wiles of a woman are well known. This may be their source or origin.

While in Genesis 3 the Serpent first comes to a reader’s attention, here He has a much older history, including planting the Tree of Knowledge of Good and Evil in the middle of the Garden of Eden.

Genesis 1:26-27 states “Then Eluhiym said, ‘Let Us make man in Our image, according to Our likeness’.” All thirteen of Them are implied, not just those with the human forms like Yahuw’ah, Sar Shalowm, Buzbiy and Mowsiyah.

The FIMIOLs were first imprinted on the landscape around 63,000 years ago. They reflect Their thought world at that time regarding events destined to begin taking place roughly 55,000 years into the future.

Here the relationship takes on a new dimension. Once it is appreciated that Earth is a decoy planet to keep the God Serpents and Dragon away from the other inhabited exo planets, then this becomes a deliberate ploy. 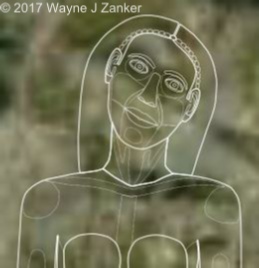 All females are made in the image and after the likeness of Mowsiyah, one of the Seven Spirits of Eluhiym.

Despite His deceptive nature Mowsiyah had a soft spot for the Dragon-Serpent and They became close friends - very close.

After all, They have known each other for over thirteen billion years. OM was only cast out of Heaven some 603 years before Noach’s Flood.

Mowsiyah usually behaves according to the company She keeps. Away from OM She comes across as regal and gracious, yet in His presence perhaps more than a little naughty and rebellious. He had that effect upon her and passed it onto those created in Her image.

So while El Shadday was assembling Chavvah’s organ shells in the moist soil, the Serpent was knowingly allowed to get close to her.

In that moment a familiar interest was established, yet without her being aware of it. It is so sad to learn of this deception, since it affects everyone.

Her own 110 clusters enabled her to resist OM’s many, many advances for over sixty years, assisted by her healthy relationship with Adam who shared only one 110 cluster. His other is 101. El Shadday had also been visiting them every morning, often accompanied by Elyown and other Eluhiym.

Why Was OM Expelled From Heaven?

Here is where the reality gets very disturbing indeed. The Seraphiym may cry out “Holy, Holy, Holy is Yahuw’ah of Hosts (Isaiah 6:3, Revelation 4:8). His name is likewise to be treated as holy (Matthew 6:9).

However, that respect only came about after much trial and error. The Eluhiym first had to discover procreation for Themselves. With whom did it work and whom not? So They experimented among Themselves.

Being the sole female with a human likeness, Mowsiyah had relations with both Yahuw’ah and the Lamb-Man. Sar Shalowm and Buzbiy were subsequently born from such intimate encounters.

To be expected, She also had sexual relations with the Dragon OM. He has an intact penis, although is totally incapable of siring offspring. According to Yeshuwa, She evidently enjoyed this, as females tend to do when making out with an intact male.

Always the charmer Satan exploited Her. Since the high moral ground had not yet been set, He was able to impress more than a few angels in Heaven with His prowess and arrogance.

Nonetheless the majority of angels there did not approve of this unorthodox behaviour. The nine other Creator Eluhiym saw Her being dragged towards the dark side and decided to deal with these two recalcitrant Eluhiym.

Miyka’el was instructed to gather sufficient angels to confront OM and His supporters. OM was quickly subdued, since He has no arms to hold any weapon, just fiery breath and a nasty bite. Furthermore He is not all that big. His breath did not bother Miyka’el and His mouth was quickly sealed shut.