The New Earth Under A Different Sky -  II

Was it the Kena’anites (Canaanites) and other locals or the Niphla’iym? If the latter did this back then, why not now on Atar? They also appear to be experts at horticulture, music, animal husbandry and metal working, for these skills were taught to the descendants of Qayin (Cain) in Genesis, chapter four. They were present back then.

The other descendants of Adam and Chavvah (Eve) also learned these along with new abilities. The Niphla’iym have so much to teach and are such good, honest people. Their building traditions extend back many millennia.

That the Hebrew texts still retain this information shows just how ancient and authentic their sources are. Mosheh indeed wrote them (John 5:46). No mid first millennium BCE scribe could ever comprehend this. They were more interested in downgrading El Elyown (Yeshuwa) to “ the angel of Yahuw’ah.” 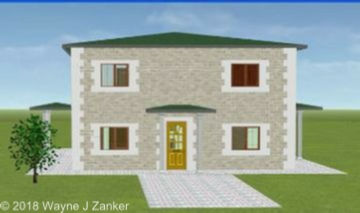 All residences are identical and have to be due to the advanced technology they contain. Each sits on a four acre block 88 yards wide and 220 yards long (80.47 metres x 201.17‬metres).

On all four sides is a porch under which one can relocate to another place and then return.

The white brickwork does not appear in NCH’s DreamPlan Plus™ drawing used above. It was added later and more accurately resembles the building. These are already furnished by the Niphla'iym. The sky and green landscape in the top image were also copied from the same software.

Going to the beach, shops, school or work will be fun, for there are no private motor vehicles and bikes on Atar. Instant Relocation Vehicles or IRVs, though, do make deliveries and will be built in factories there. Electric-powered utility vehicles do other essential tasks, but are not for general use.

Here the technology to fold the fabric of space and time will not be made available on Earth. So no job opportunities will be created for it down here.

Other diagrams like the above, including maps and a street directory, are being prepared. Download this 12-page A3-size PDF to learn the latest.

Whose Idea Is Atar?

Inhabiting Atar is Yahuw’ah and Yeshuwa’s idea and has been predicted from the beginning, being implicit in many prophecies. When one reads the Book of Deuteronomy, it becomes apparent that the Exodus from Mitsrayim in 1603 BCE and settling in the Promised Land was a foretaste of the migration to Eden, to be repeated without bloodshed.

Mosheh and Aharon did not organise the original Exodus. However, they came on board. The present writer likewise is not organising the relocation, although like them is under a divine imperative to go there. It seems to be his destiny to relocate, one for which he has been preparing all his life.

Already familiar with IRVs from visits to Heaven and several FIMIOLs, once the option manifested it was easy for him to accept moving permanently to this beautiful, unpolluted, Earth-like planet with everything laid out.

After researching the book of Isaiah the present writer has learned that chapters 65 and 66 originally preceded chapter 24. However, the desecrators of Scripture decided there was no such thing and put them at the end.

Throughout his book Y’shayahuw has in mind the new Earth under a different sky. Indeed, like Yeshuwa and at least Yohannan, he stood on its surface at the site of Mount Tsiyown, where Sterling now exists. Shimon Kephar also saw it. Isaiah 40:3-5 matches the topography perfectly.