The New Earth Under A Different Sky -  III

He believed that the remnant of the house of Ya’aqob and Yisra’el were about to go there in his own day. However, only he, his family and some students did so in 684 BCE. He lived for another sixty years. This actually represents the second migration there. The first to go was Chanowk (Enoch).

Y’shayahuw had access to the original Towrah, which featured seven books and was familiar with the vehicles which brought the manna from Heaven. It is not just the people involved in the biblical narratives who feature in the FIMIOLs. The IRVs do too and the early Scriptures had plenty to say about them. His library is also safely stored on the new Earth.

Why Atar At This Time?

This is a binary universe full of contrasts, like day and night, red and blue, large and small, rich and poor, short and tall, truth and error, and so on.

NASA and other space agencies are intent upon going to the Moon and Mars and establishing colonies there. Undoubtedly these are hostile places demanding hermetically-sealed, self-supporting facilities and vehicles.

In contrast to IRVs, traffic is slow and expensive. Nonetheless this vision of space generates huge investments, creates an ever increasing number of employment opportunities, is newsworthy and produces some brilliant inventions.

To reach Atar, the fabric of space and time must be folded in concertina fashion thousands of times. Relocation, though, is instantaneous. No one travels blind. There is nothing to see but the precise destination. Movement is minimal and so is the expense.

To put a perspective on this, the front door of the house on the previous page has to be viewed clearly forty light years away. Yet all houses look alike except for the colours of their roof and the appearance of their garden.

Here the pilot’s mind is trained to view the physical destination with help from the IRV engine, whose frequency creates a visual tunnel through the fabric. Learning how to see, grab and manipulate the Seventh Dimensional membrane requires a long period of exposure to it and the empirical soul virus not only prevents this, but refuses to acknowledge that it even exists.

Given the binary nature of things it is therefore logical to conclude that the Creators also have a planet of Their own to ensure Their version of humanity survives. So these two options have always existed.

Atar was only delivered to its orbit around zeta TrA on September 3, 1947. Prior to this it belonged to 72 Herculis. Planets, too, can be relocated. The space around atoms makes such compression possible. 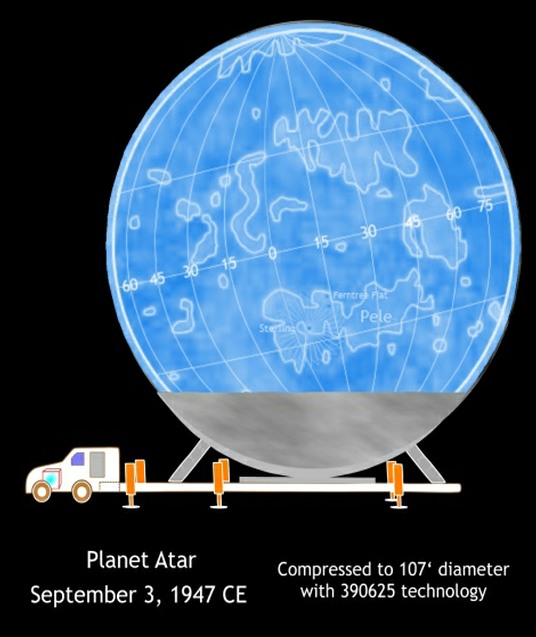