Initially this was the Front Page from October 7, 2017 before being replaced shortly after April 20, 2018 to deal with huge advances in knowledge. It is retained for its historical value. Here Atar is still called Eden.

Please observe that the author of this website does not and never will approve of marriage equality, regardless of any man-made laws. If a reader finds this upsetting, then do not proceed. The Creator Eluhiym, with whom he works, are one hundred percent against homosexuality and never designed nor intended marriage to be a sexual union between persons of the same gender. His task is to state Their position, which is quite an involved process and structure.

For the past nine months these web pages have been undergoing radical and mostly unexpected changes. Please bear with the author as he seeks to deal with some quite challenging issues.

During the evening before last NYE (December 30, 2016), Yeshuwa took him from Heaven to a new planet. Why, he asked? Well, He wanted him to think about living there. It will become a place of refuge for him.

As of October he has visited this new Earth under new heavens, that is, a different sky, some 24 times. Each visit has provided new knowledge, not just about the planet itself, but what the Scriptures have to say on the matter.

The past nine months have provided quite an intense learning curve. Other than the FIMIOLs and three references in the Bible (Isaiah 65:17-25, 66:22-24 and 2 Peter 3:13) there is no other source material. Revelation 21:1-2 refers to another new Earth: one without a sea or sun. [This view will change in the following months.]

Yeshuwa’s students were meant to relocate there via IRV back in about 65 CE. By 70 CE when Revelation was written, the opportunity had passed thanks to Nero. Yohannan only had the new Earth as part of Heaven in mind.

Naturally this author has asked for material evidence and many times he has been assured that he will get it. After all, Yeshuwa showed him the FIMIOLs in satellite images on Earth’s landscapes. They provide material evidence, yet evidently are not good enough to be accepted by the wise and knowledgeable of this world.

This planet, which he has called Eden for want of a better name, is a physical planet with twenty-four hour days and a standard year. It has a breathable atmosphere with fish in its seas and oceans, yet no high mountains. In its southern hemisphere a settlement called Sterling is being built by a people who did similar work on Earth in earlier times.

The present writer has already been privileged to set foot physically on there and has briefly met with some of the builders. Translators of Genesis 6:4 called them Nephiliym. The original Hebrew noun was Niphla’iym (pron. nif-la-eem). It has an entirely different meaning.

There they use vehicles and ways of getting around reflected in the FIMIOLs and Scripture. Each makes use of the Seventh Dimension where the fabric of time and space is folded. Understand this and they become inexpensive forms of getting from point A to point B. 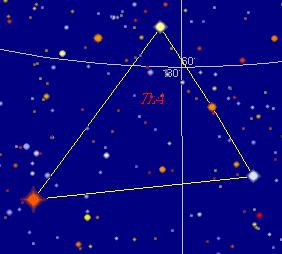 Other than its sun being a binary star, astronomers provide little more data; just that it is slightly brighter than this sun and situated 39 (actually 40) light years away.

They have detected no orbiting planets, since they lie on an axis beyond the parameters required by telescopes to discover exo-planets.

Planet Eden’s sun is zeta Triangulum Australe. Its bright star exists outside the triangle in the bottom left hand corner and not all that far from the Southern Cross star group. With the naked eye, though, Zeta TrA can barely be seen. By way of interest where will Earth’s sun appear in its northern sky?