A very different El Shadday (El Sufficient Provider) only became involved later and the Two then worked together as a pair. This will become very evident in the pages ahead. Abraham was definitely no monotheist.

The personal name Yahuw’ah was first revealed to Mosheh in Exodus 6:2-3, yet was imposed upon all earlier narratives by scribes who, in their pursuit of monotheism, rejected the Lamb-Man as Eluhiym and called Him the Angel of El or Yahuw’ah instead. He was no messenger angel who spoke with the authority of Eluhiym (Exodus 23:20-23). After all, He is the same Rider on the White Horse in Revelation 19.

The Sadducees did not believe in angels. Nor did their fathers the sons of Tsadoq (Zadok). To then call El Elyown the “angel of El or Yahuw’ah” or just Yahuw’ah could be interpreted as blasphemy. It was meant to be insulting.

Every angel in Heavenly Glory knows that the Creators are ten in number and the other three called God/THEOS are two Serpents and a Dragon. The angels Gabriy’el and Miyka’el certainly know them all. It is preposterous to claim that either promoted monotheism. Yahbeth, the Spirit of Truth and one of the Seven Spirits in front of Yahuw’ah and the Lamb, most certainly does not promote monotheism. Any ‘Holy Spirit’ which does is false.

Now the One who spoke to Mosheh from the Burning Bush in Exodus 3 was, in fact, El Elyown, not Yahuw’ah. It was He who said in Hebrew ehyeh asher ehyeh (Exodus 3:14), which has traditionally been translated as I AM WHO I AM or I AM WHO I WILL BE. However, this is not its true meaning. 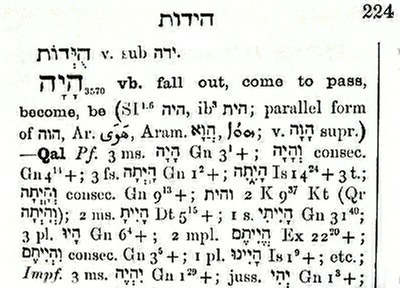 The Greek Septuagint’s εγώ είμι ό Ων, that is, I am THE BEING is probably responsible for this. 2)

Hayah as a Hebrew verb has a number of meanings. The accompanying images are of text photographed in the Hebrew and English Lexicon of the Old Testament edited by F. Brown, S. R. Driver and C. A. Briggs, p. 224.

Half way down one can see the imperfect form ehyeh, which refers to incomplete actions. The bottom image highlights its preferred meaning of “I make happen that which I make happen.” 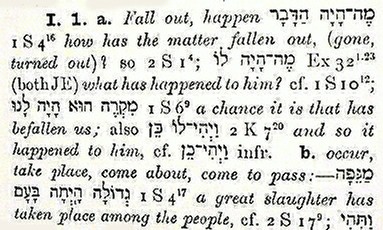 Why would El Elyown or the Lamb of Eluhiym give Mosheh an existential answer? So what if He is just a Being who exists. The enslaved Yisra’elites also ‘existed’ as beings, but were very unhappy.

Rather the name is meant to provide reassurance to them. It is full of promise. He is going to create events to free them from Mitsriymic (pronounced mits-reem-ick) 2) or Egyptian slavery. What a positive message to convey to those hurting. In other words, the translation “I AM WHO I AM” is quite meaningless.