This page is intended to be an introduction to working with the real Creators. With so many encounters on record volumes could be written.

Living with Yeshuwa and Yahuw'ah is like going on a mysterious journey where They travel ahead, it seems, and one struggles to keep up with so much magnificent scenery to take in.

Sometimes They let one stop for a while and have a good look around. Then when he or she wants to stay longer, They move on and the individual has to follow. Usually after a painful episode the next part of the adventure begins to unfold as insights pour in for consideration and action.

It is like experiencing the Exodus. Yahuw'ah and El Elyown were always out in front with more than a million souls under Their leadership. Think of the pressure these refugees were put under while still in Mitsrayim, having to walk twenty miles per day for several days -  men, women and children plus livestock -  in order to collect everyone and escape the Hyksos Pharaoh and his army. They actually travelled south along the Nile for at least ten days.

Then there was that 16-mile walk across the Sea of Conclusions (Red Sea) overnight on May 4-5, 1603 BCE. Next after staying at Mount Ciynay for a year they moved on and dwelt at Kardesh-Barnea for 38 years before finally making the journey via the Kings Highway to Yeriycho and the Promised Land.

It is now over forty years since the present writer was ordained on the 1984th anniversary of Yeshuwa’s conception, December 18, 1977. He has already set foot on the physical surface of planet Eden, albeit for a fleeting moment. Eden belongs to the goldilocks zone of zeta Trianguli Australis in the southern skies forty light years from Earth (ast. 39ly). 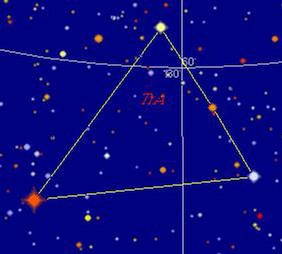 So far astronomers have not found any planets there due to its solar system having a different axis to Earth’s sun. Exo-planets are discovered only when they appear as dark spots crossing the face of a star. This is not unusual.

Arriving there was an education in itself and there was nothing in the literature to inform him, just the Book of Isaiah and two Gospels and a tiny reference in 2 Peter 3:13. Zeta TrA is the brightest star in the bottom right-hand corner below. 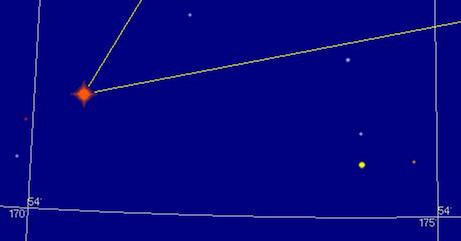 It took him six weeks and several attempts before success finally intervened.

Some of them led to feelings of exasperat- ion due to the need to understand specific processes.

In other words, it was no walk in the park. One of the lessons to be learned when dealing with Them is that none of the Creators like to provide time line information. For impatient people like the present writer this can become frustrating, especially after being decades on the job. So it is best not to ask.

Please read Matthew 24 where a time line is given, yet without any dates. Attempting to define any event other than the destruction of the temple is impossible (24:36). The reason for this is They have to deal with the God Serpents. Long ago They learned that it was unwise to provide accurate dates and times.

Zeta TrA is in the bottom left-hand corner. It will be interesting to see what astronomers can add to what is already known of HR 6098 or TYC 9278-2951-1.