After brunch I had a look around. Bolshevik Gully was just a dry gully with dirt roads and no bitumen. Dugouts and sheds lined the eastern slopes and buildings the western side, including behind the motel. Shops and petrol pumps were at the top of the rise. 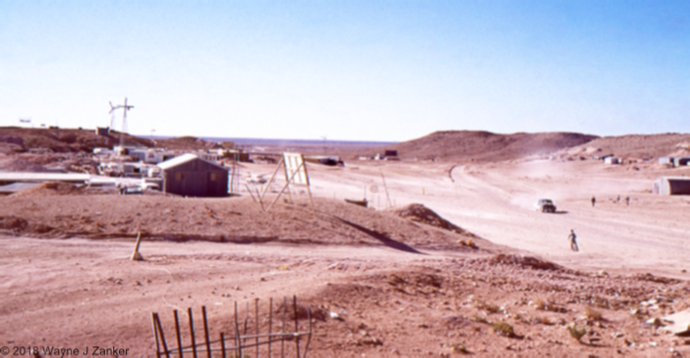 Coober Pedy’s totally strange environment is the complete opposite of Sterling on Eden. Nothing prepared me for what has been likened to the martian landscape. It took ages to find my away around.

A week earlier I was a  year 12 college student at Highgate east of Unley, both suburbs of Adelaide. Now at the start of summer there I was in a hot, dusty, drought-ridden desert, the heat lasting till the beginning of May and well under way already with very hot daytime temperatures, yet cool nights.

During the next few days they reached the high 30s and low 40s Celsius. While not uncommon, it was a clear heat nonetheless. Air-conditioning was sought after working outside sweeping away the dirt and the dust. The managers of the motel were an elderly pastor and his wife, the store owners their son and his wife.

In no way was Yeshuwa going to let me go to Eden without intimate knowledge of its settlements and surrounds. So after at least twenty visits there from Heaven, where we usually met first, He hard-wired my spirit or consciousness to go instantly to Sterling whenever I prayed to go to Heaven each Tuesday night to witness the rotation of the 24 Thrones one throne to the right, and undertake an hour's instruction.

There is no way now to avoid Eden. I try to spend at least half an hour there each time with the lights off and my eyes wide open and just focus on whatever I am required to observe, remember and draw, even though it is forty light years away. Heaven is twice the diameter of the universe away.

Before leaving Eden I sketch rough outlines to help with recall, since observations can be quite complex. Plus there is the hour-long interview afterwards. It is a lot to take in. Then, as this happens, my mind is directed towards the Scriptures to see what they have to say on the matter. Indeed they have much to say and it is a struggle to keep up with this too.

It is true one cannot second-guess the Creators. Not only are They hard to get to know due to God-based religion, but Yeshuwa keeps reassuring me that doing all this research while on Earth and not on Eden will make sense when I finally move there.

My hunch is that I will not have time to complete these web pages with a period needed to settle in and learn how to pilot my own IRV. And I need a holiday. My last decent one was back in 1992 when I drove up to Coober Pedy on my own for a week or two.

Yet what is a year and a half or so in the big scheme of things? Time passes. Yeshuwa the Anointed is the One organising the move. Whenever one tries to second-guess Him, one usually falls flat on one's face, proverbially-speaking. I now try to avoid this as much as possible. Then life is good.

Once one understands how the Creators operate, getting involved with them is awesome. And it is as easy as calling upon Their names.

How can all this be possible, one might ask. Like salvation, “with man this is impossible, but with Eluhiym (not God) all things are possible” (Matthew 19:26).

While the biggest prophecies still await fulfilment, along the way minor promises are being kept almost every week - to keep the faith going. This is going to happen and is independent of what humanity believes.