This is OM, Yeshuwa’s nemesis and counterpart as well as a great charmer. Like Him, He is also 13.4 billion years old and an Eluw’ah with enormous power and influence. He came from the same primordial cloud of helium plasma as Yeshuwa and the eleven others.

Observe the Tree of Knowledge of Good and Evil above Him. It was His tree planted in the Garden of Eden; hence the warning to Adam (Genesis 2:17). A sin occurred whenever he refused Yahuw’ah’s request to be circumcised. OM also bears a striking resemblance to the fossilised Archaeopteryx, whose likeness and form He clearly inspired, like all dragons, lizards and snakes.

On the landscape He looks huge and imposing. Yet He is only eight feet long, stands 3’ 6” tall and has a wing span of 5’ 3”. Little wonder He could only bruise Yeshuwa’s heel, while He bruised OM’s head (Genesis 3:15).

There are at least six FIMIOL photographs of Him. Observe that He has no arms; hence His lack of physical creativity. Yet what He lacks here He more than makes up for with His mental prowess to deceive and take the religious world for a ride by re-inventing everything, and then pose as God.

This FIMIOL photograph is located in the hills and ranges east of Antakya in southern Turkey. In biblical times it was the capital of Syria. From there Antiochus Epiphany IV and his son Eupator V sent their armies south to Yehuwdah and Yeruwshalem in a concerted attempt to destroy “the faith of the fathers.” Circumcision was banned at the threat of death with both babies and their mothers murdered.

First and Second Maccabees record their cruel exploits. They also relate how Yehuwdah Maccabee and his brothers rallied a small army of local fighters and eventually drove them out after defeating the Syrian general Nicanor. The feast mentioned in John, chapter 5, celebrated that victory.

Antioch has had a long association with non circumcision and still does today. According to Acts 11:26, “the disciples were first called Christians in Antioch.” Their Christianity, however, is nothing like what Yeshuwa had in mind with His teachings on the new Earth reflecting Isaiah 65-66, Second Peter 3:13 and Revelation 21:1.

Yet Paul, Barnabas, Silas and Timothy ensured that their opposing gospel spread further afield with three missionary journeys staged from there.

How coincidental that the men of Antioch protested against circumcision and sent Paul and Barnabas down to Yeruwshalem for the council in Acts 15 when OM is clearly uncircumcised. Such is His power and influence!

OM -  or Satan to the Elect of Yahuw’ah -  is indeed the inventor of all religions. Unable to create matter Himself like Yeshuwa and His Eluhiym, He and His two serpent companions Ba’alzebub and Sinvesta turn all their efforts towards poisoning the minds and hearts of human beings created by Yahuw’ah. These are the source of all soul viruses which cut minds off from their true Creators. And planet Earth is Their playground!

Ba’alzebub also happens to be the father of OM the devil (John 8:44) and is a murderer from the beginning. He first appeared as a reticulated python, and grew wings and legs for flying and standing upright. 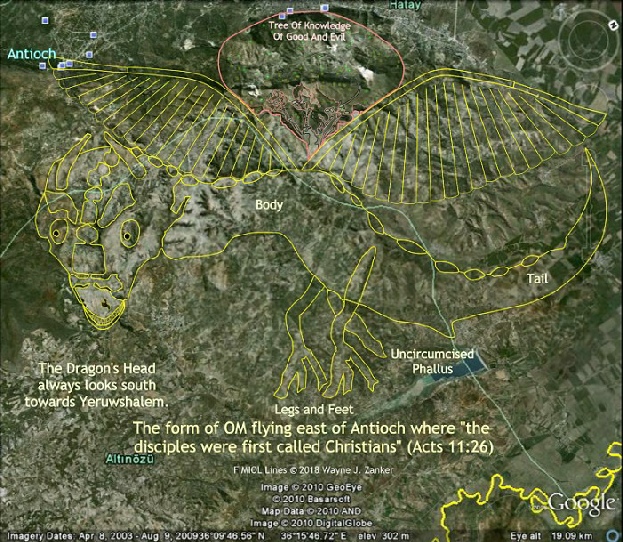 Yeshuwa’s Nemesis: OM the Dragon and Satan -  I